O.k. so last time I blogged , I was as happy as Larry and about to tackle one of the big scenes of the book. No sooner had I submitted the post then I realised that I had left out a chapter on one of the main characters!!! This chapter had to be written as it was intergral to the story and explained how the character got from point a to b and why he was alone. So in effect, I spent most of last night writing said chapter, which incidentally has turned out rather well.

So this week, I am finally writing that big scene! I started it yesterday and I'm pleased to say it has flowed so far. I only stopped when I came across a plot problem that I had to think upon. Anyway, this morning I worked out how to deal with said problem and am now eager to write it at lunch.

P.s. Just like to mention a thank you to those of you that regularly read my ramblings. In particular, Catherine who also comments on a frequent basis. I will be better at responding to comments I promise.
Posted by Unknown at 8:17 AM 1 comment:

Just finished another chapter today. It contained a lot of important information in it, whether it will survive in it's current form once I go through and do my first edit of the draft remains to be seen. There are some chapters I write that I just know, I have written really well and will not require much editing, others don't seem to flow as nicely and might need a bit of work.

Anyway, the next chapter I'm about to write is the big event, the one that the story has been leading to so far, the pivotable point of the whole novel.

It's going to be tough, but boy am I looking forward to writing it this week!!
Posted by Unknown at 3:47 PM 1 comment:

I began writing again yesterday after my brief hiatus. Have to say it felt good. I thought I might struggle after having a week and a bit off, I was especially worried that I would struggle to find the same voice. Luckily, I had left my story half way through a chapter (a tip someone suggested I do) so all I had to do was to re-read what I had written and continue. It was like getting on a bike again.
Anyway, before I knew it, I had churned out another 2,000 words. I love the fact that before I begin writing for the evening, I know roughly what I want to say, but the story soon begins to morph into something else. Yesterday for instance I was extremely pleased with what I had written. I thought maybe, it would have been quite a mundane but necessary part of the story, it turned out to be quite entertaining with snappy dialogue.
More importantly, I made a good decision at the weekend. When I first started to think about writing this novel, I was full of self doubt. Could I do it? Am I good enough? What will set it apart from other novels and make it stand out? Those questions still haunt me by the way, but now I am more obsessed with completing the story for my own enjoyment.
It was contemplating an answer to the last question that encouraged me to put pen to paper. I thought to myself, wouldn’t it be different if my novel was set in a medieval, fantasy world but had some advanced technology, if some items or equipment didn’t quite follow the rules that we are used to?
It was then that I came up with the idea of a weapon that was crossed between a broadsword and an early version of a gun. I went into great detail into working out the semantics of the weapon. It would be essentially a sword and fire two ball bearings from the hilt. I even considered having a telescopic blade. I called it the “Gunnerswerd”
Having worked out all of the detail, I then wrote a scene (it actually turned out to be part of chapter 6), where I introduce the reader to a minor character who is sitting on his porch polishing the ball bearings and firing the gunnerswerd. I found it extremely hard to write, I wanted to describe the scene so the gunnerswerd appeared natural, but at the same time describe exactly what it was. The finished scene was actually quite good. I then mentioned the gunnerswerd once more when I was talking about a young Rhact, again I found the passage uncomfortable to write.
Over the weekend, I realised I was 12 chapters into my story and only mentioned this weapon twice. I would have to go back and insert it into other areas of the story. I then had a revelation!!!!
I hate it! Why was I struggling to include something that even I didn’t feel comfortable writing? When I read fantasy books, I like the rules. I like that it is going to be swords, awes, arrows and the occasional magic. I absolutely abhor it when the author includes anything like a flying car out of no where. So why was I trying to include it in my novel? So, with a deep breath, I took the decision to get rid of it and boy do I feel good for it. What was I thinking even including such a thing?
It will mean re-writing certain sections but that is what the first edit is for. Someone has since pointed out that there is a similar weapon in the “Dune” novels. I have to confess that I’ve never read them, part of the reason is because they sounded like something I wouldn’t enjoy due to having technology like that in them.
So what you will hopefully read one day, dear reader, is a great story in a typical fantasy world. Boring? I promise you it won’t be.
To answer my other questions regarding self doubt. As Stephen King says in his book “On Writing.” The story and characters will make it stand out from other novels – hopefully!!!

Better news on the Dance of dragons book.

Another update on George R R Martin's "not a blog"

I decided to take a break from tearing and fumbling at the Meereenese knot, and completed a chapter about another character today. A character who is very far from Meereen.


Finishing the chapter felt good. Especially since it also completed that character's arc for the book. Admittedly, she has only two chapters in DANCE, so I am not sending up any flares. But hey, I'm done with one of them for the present, that's something.

Only thirty-eight more POVs to wrap up...

This makes me feel more optimistic about the book again. For the record, I think GRRM is doing a tremendous job. Yes, the book may be way overdue, but the amount of pressure the guy must be under doesn't even bear thinking about. The fact that over the last couple of months, he seems to be making more and more progress is great news.

Incidentally, I know the last couple of posts have not been about the Ritual of the stones, but from Monday I will begin writing on the book again. Yesterday, I was taking a walk with my (now) brother in law, he is one of the only people who usually shares my opinion on films, tv,  books practically everything.  Anyway, I was in a pretty inspirational mood involving the book and wanted desperately to share all of my ideas with him. Luckily, I refrained, as I am really looking forward to his opinion once I have finished. I have shown him one  chapter of my book and he has already given some useful pointers.

I can't wait for others to read my work and to hear their opinion.

Keep the gloom away.
Posted by Unknown at 12:34 PM No comments:

Fantastic day and I am now a proud husband. Everything went perfectly and my wife looked stunning.
Will resume writing next week. The break has probably done me good. 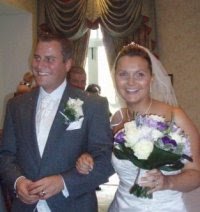 The Knot remains in tact!!

From George R R Martin's not a blog comes the following quote:

A DANCE WITH DRAGONS: I took a good hard swack at the Meereenese knot. The sword bounced off and cut my nose off. Bugger.

Unlike many fans of the tremendous Ice and Fire series, I am not angry at how long he is taking to deliver the next book in the series. No, I am not going to pretend that I am a prolific author and tell people to get off his back as it is really hard to write a book. Like every fan though, I am desperate to read Dance with Dragons. This latests quote is heartbreaking, a couple of weeks ago, everything was beginning to look rosey. It looked like George was nearing completion on Dance and we would finally get to read the book we have all been waiting for.

I hope George can unravel the plot that is causing himself so much stress. I just can't imagine what the problem can actually be that it is taking this long to sort out. Then again that is probably why I am an aspiring author and he is a mega bestsellar.

Keep the Gloom away.
Posted by Unknown at 9:06 AM No comments: