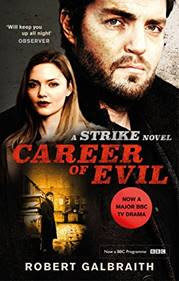 I have to confess I hadn’t heard about Robert Galbraith until the revelation many years ago that it was a pseudonym for JK Rowling. Having loved the Harry Potter series (yes, I queued up to get the last two books at midnight and yes I was in my mid to late twenties).

Having heard mixed reviews about the Casual Vacancy (still haven’t got round to reading that), I approached the new series with a degree of trepidation. It turns out I had no cause for concern. I loved the Cuckoo’s Calling and enjoyed the Silkworm even more.  I was very much looking forward to this third entry to the series then.

When a mysterious package is delivered to Robin Ellacott, she is horrified to discover that it contains a woman's severed leg.
Her boss, private detective Cormoran Strike, is less surprised but no less alarmed. There are four people from his past who he thinks could be responsible - and Strike knows that any one of them is capable of sustained and unspeakable brutality.
With the police focusing on the one suspect Strike is increasingly sure is not the perpetrator, he and Robin take matters into their own hands, and delve into the dark and twisted worlds of the other three men. But as more horrendous acts occur, time is running out for the two of them...

Opening Sentence: He had not managed to scrub off all her blood.

One of the main things Galbraith excels at is creating excellent characters. In Cormoran Strike and Robin Ellacott he has created one of the best partnerships in fiction today. They get on so well, that I actually can’t stand it when they do argue. I recall in the Harry Potter series anytime Harry and Ron bickered, I couldn’t wait until they reconciled. However, with those two characters, although I could see the reason for their polarised views, I knew it would only be a matter of time before they were on speaking terms again. With Strike and Robin however, when they argue I am genuinely fearful it will be the end of their friendship.

Galbraith has created such a strong and stubborn character in Strike that you know how he is going to react and you also anticipate how difficult it will be for him to change his opinion. With Robin, you have a character desperate to prove herself at all costs, failing to see the wood through the trees.
Both of these character traits come to the fore in Career of Evil as both characters are developed. In both Strike and Robin we learn more about their past which provides plausible explanations for their current situations and decision making.

It makes for tense, fascinating reading and in all honesty, I love both these characters so much I could read a whole book about these two characters making a cup of tea and then staring at a blank wall. We also get more insight into Strike’s love-life and are reminded that he is not the nicest and caring of people.

The secondary characters are also fleshed out more in this novel. Matthew – Robin’s fiancé appears more than just the caricature of the pompous ass he has seemed previously, whilst Robin’s mum also gets some screen time. The best character is Cormoran’s shady associate Shanker. He displays a dozen shades of grey tinged with a large dose of loyalty which is extremely endearing.

The plot is intriguing; when Robin receives a body part in the mail, Strike identifies a number of potential culprits who could be out to get him. Not only do these suspects add more layers to Strike’s character they are also interesting in their own right. What I liked most about this story, is that it also reveals Strike’s struggle to maintain his business. Despite a couple of high profile cases, the job offers have not exactly come flooding in and his relationship with the police force is tenuous. It all makes for a grounded, realistic story.

The ending is extremely satisfying both in the revelation of the criminal and the conclusion to the personal dramas going on in Strike’s and Robin’s lives. The next book in the series is released in September 2018 and I don’t think I can wait to read it.

As many of you know I find something inherently comforting about reading James Patterson’s Alex Cross series. Alex Cross was the first series I really invested in many moons ago.
Over the years the series has gone from excellent, to having a major dip as the character of Alex Cross seemed to become too unwieldly for Patterson to handle. As an author Patterson made the smart move of stripping the series down to the basics and letting his protagonist concentrate on more intimate threats. As a result, there has been a considerable increase in quality.

Shots ring out in the early morning hours in the suburbs of Washington, D.C. When the smoke clears, a high-ranking cop lies dead.

Under pressure from the mayor, Alex Cross steps into the leadership vacuum to investigate the audacious killing. But before Cross can make any headway, a wave of murders erupts across the city. The victims have one thing in common – they are all criminals.

And the only thing more dangerous than a murderer without a conscience is a killer who thinks he has justice on his side.

Opening Sentence: He change identity like many warriors do before battle.

I really enjoyed this latest entry in the series. I prefer the Alex Cross novels when the antagonists are less cartoonish and the threats are more personal. In Cross the Line however, the villains are neither. They are criminals with a conscience believing they are ridding the world of a nasty presence and thus making the world a better place. For once they don’t have a personal vendetta against Alex Cross and could not care less who he is. As a result, it reminded me of the earlier novels where Alex had to solve the crime like a normal detective without worrying about his family.

Why is this so refreshing I hear you ask? For the simple reason that it allowed the other members of his family to breathe and have their own story arcs: Janine continues to pursue her running career and faces more hurdles (excuse the pun), Little Alex has a bit more substance to him whilst Bree struggles in her new promotion. It serves to provide a more rounded picture of the Cross family and makes you more invested in the characters.

The pace of the novel is as fast paced as usual. Cross and Sampson work well together but they appear more vulnerable in this novel. Their age is catching up with them a little and they survive encounters more by luck than ability. Again, this is nice to see.

The end is extremely satisfying as we get a good old fashion chase and slugfest. I always say with James Patterson you know what you are getting. A nice, comfort read that ticks enough of the boxes for you to enjoy yourself a lot and come back for more.

A few weeks ago I promised a cover reveal. Well today is the day I make good on that promise. Normally this is the point I would do a bit of a blurb, talk about the writing process and then post a picture of the cover. I always find that interesting when other authors do it, however, having discovered I can design pretty good maps with a little bit of effort (more on that in future – see I am such a tease), I decided to experiment with making a video reveal.

It is by no means a professional video, but it was quite fun making it. Apart from scaring myself witless filming in the woods at night, it was also interesting editing the video and learning about commercial licensing for the music etc. When I said interesting, you know I meant “frustrating” right?

So here it is, the cover of my final book in the Ballard of Frindoth series: Only Stones Remain.

Posted by Unknown at 4:09 PM No comments: