1st March tomorrow. The day I have scheduled myself in to begin the first edit on my novel. In regards to the short stories, I have edited and formatted them and have also set up a spreadsheet listing the magazines I need to send them off to. All that remains is to actually send them off. In the meantime here is a picture of how my novel looks like printed out. I've added the lego man for perspective. 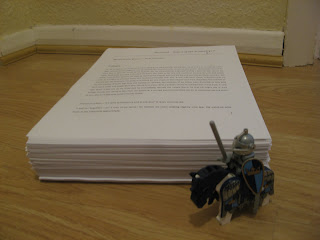 Mood = Pumped
Posted by Unknown at 2:16 PM No comments:

Good morning all. I say good morning but it is far from it weather wise. It has been consistently bucketing it down for over fours hours. The kind of freezing rain that makes you dream of holidays in warmer climates. I’ve already been evacuated from my building twice due to power cuts.
Anyway, enough with the mundane weather issues. We are nearly at the end of February which means I can end my self-imposed exile from the Ritual of the Stones and begin editing with a fresh perspective.
As you might know, one of the things that always discouraged me from writing a novel was I hated the editing process. I was never very good at going over what I had written. Whether it was essays at University, this blog or even simple emails at work (the latter I’m still notoriously bad at checking).
I don’t know why this is, but I have always been of the attitude: once it is written, than as far as my brain is concerned, it is done. I’m no longer interested in looking at it, or polishing it.
You see, I find it hard to change my work. Every time I think to myself, “well that can come out,” another voice opposes the first and sees why I included the phrase in the first place.
I recognised this attitude would not be good enough if I was to write a novel. So it has been with some trepidation that I have been approaching this stage of the process.
So what I have been doing to overcome this vice of mine I hear you ask? Research, research, research. I have read a lot of material on the editing process. I submitted some short stories to critters and learned how others edit.
Having done this research, I don’t pretend to be the world’s best editor by any stretch of the imagination. But at least I have now giving myself a fighting chance as making my novel the best it can be.
I edited the aforementioned two short stories last week. There were two things that surprised me: (If there was a theme for this post it would be the number 2 it would appear!!).
1) How much I enjoyed the process. I didn’t think anything of chopping the first and last third of the story. I liked the writing but the strength of the story was in the middle. That is where the story is told and so that was all that was relevant. The story is now infinitely stronger for being shorter and punchier. I also loved eliminating all those needless words: “That” and “Just.” When I was writing the first draft of these stories I was conscious of the fact these words creep into the text but I was still shocked how many there were.
2) I have actually improved as a writer. The first story I wrote after only a month of starting RotS. The second story I wrote in one session just before Christmas. The difference in quality was staggering. It just goes to show that practice does make perfect.

So having edited the stories, the next step is to send them off to a magazine. I have spent the last couple of days, researching magazines and checking their submission guidelines. I have also bought the magazines to see if they are suitable for my stories and have invested in the “Novel and short stories writers agency” (Please note the title could be wrong as I don’t have it next to me.) Although sadly a lot of the magazines listed are now out of date, the advice in there is great.
The aim is to produce a cover letter by the end of tomorrow and then send off the stories by the end of the week.

Roll on the rejections.
Posted by Unknown at 2:36 PM No comments:

Man, this taking a break from the novel thing is hard. I have been good though and haven't so much as looked at the manuscript. I have tried my best not to think about it either but some days that has been impossible.

I did start a short story immediately after I finished the first draft but I've found that I wasn't quite ready to delve into it too deeply. I don't want to be consumed by a short story and then come March not be ready to edit. Still I made good head way on it and will park the idea for now.

Instead, I have been doing lots of research on editing and reading up on Medieval history. I am about to edit two other short stories I produced whilst writing a Ritual of the Stones, well one was a piece of flash fiction. This will be good practice in editing and I may even submit them to magazines.

I have also had a great idea for a thriller. It basically stemmed from a conversation I was having with my wife and brother-in-law. You know the kind of "What would you do if..." type conversations. They are usually outlandish conversations along the lines of "Would you rather your penis drop off, but marry the girl of your dreams or for it to stay on but never have sex again." This one however, was quite a good question. I won't pose it because the more I've been thinking about it, the more a story is starting to evolve from it.

On another note, I am getting more and more excited with how frequently GRRM is starting to post updates on ADWD. Maybe it is not too far away now from completion. I find it fascinating to see the thought process of George and how he works.

Will let you know how the editing goes.
Posted by Unknown at 8:44 AM No comments:

Oh the elation, oh the joy. I have only gone and done it. Last night I wrote the final words of my first draft. It comes in at just over 126,000 words, consists of 375 Microsoft word pages (once formatted in double spacing). It has 29 chapters and probably a zillion errors. Do I care? Not in the least. I have achieved my goal! I have written a God dam novel!!!

Sorry for the outward display of enthusiasm, but I feel pretty good right now. I am unbelievably tempted to edit it immediately, but am determined to take February off and get some perspective. This morning, I actually feel a little bit lost. I have been so use to thinking about the novel and motivating myself to write it, that now I don’t have anything left to write on it, I feel strangely empty.

Thank you for all your support and I will keep you posted on the editing front.

P.S. I will still be posting updates on here throughout February. They might not be so Ritual of the stones orientated.
Posted by Unknown at 12:18 PM 2 comments: