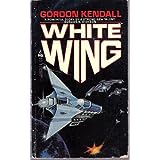 Considering I have so many new books to read, and though it may be my imagination, but the pile seems to get bigger every day! Lately, I am returning to old favourites to read, due to the amount of time I am spending sitting round hospitals, I find that I prefer the comfort of a book that I have read and enjoyed.

This one is such a book, I first read it years ago, and have kept a copy ever since. Though I have read many science fiction novels, I have always classed this as one of the best, which is odd in one sense, as its now really hard to find a copy and have not found anything else by this author.

In the story, Earth has been destroyed during a war with an alien race, and the Galactic League has accepted the scattered remnants of the human race as refugees.

They have been grudgingly given an artificial world to take as their own, and are looked down upon by all the other races in the league. They are allowed to form a squadron to fight with the other league members, and each squadron is given its own colour. To show Earths barely tolerated presence, their Wing is given white, which everyone else sees as a non-colour.
This Wing soon becomes the refugees’ source of pride as they end up with more Aces than any other and more kills as their pilots become the most skilled.

Within the Wing, there are teams of flyers and support officers and this books focus is mainly on one such team.

The characters are introduced well, with the POV changing when necessary, which increases your knowledge and connection to them.

The story actually starts with a death of a member of the team, and though this character is unknown to you, the writing is so skilful that the reader feels the effect on the characters left as you do feel as if you know them. As the book goes on, you understand why the death is felt so keenly and what the addition of a new member actually means to the team.

The characters are great, and to name just a couple of characters, you will cheer on Dustin in his struggle and feel like slapping Gregory when he acts like an idiot.
There are great battles and there is a lot of intrigue with spies, bombs and poisonings so really there is something for everyone.
All the threads are nicely pulled together at the ending, though it feels like there could have been a sequel, but unfortunately this never materialised.
This is a hard book to find now, but trust me, it is really worth the hunt.