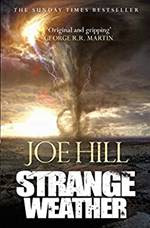 I’ve read most of Joe Hill’s novels. Like the majority of people, I was intrigued by his full debut novel, Heart Shaped Box and liked it a lot. His follow-up novel Horns had a premise which sounded terrible but was actually really enjoyable. It was NOS4R2 which really made me sit up and take notice though. I thought that was an excellent book. The Fireman promised to be his magnus opus and whilst I enjoyed it, I was a little disappointed if truth be told.

I have never read his short story collection 20th Century Ghosts but have heard a lot of good things about it. I have however read his collaboration with his father In the tall grass which I loved and I also really enjoyed his comic Locke and Key.

So it was with an open mind that I approached his new collection of novellas:

The Blurb:
One autumnal day in Boulder, Colorado, the clouds open up in a downpour of nails, splinters of bright crystal that tear apart anyone who isn't safely under cover. 'Rain' explores this escalating apocalyptic event, as clouds of nails spread out across the country and the world. Amidst the chaos, a girl studying law enforcement takes it upon herself to resolve a series of almost trivial mysteries . . . apparently harmless puzzles that turn out to have lethal answers.

In 'Loaded' a mall security guard heroically stops a mass shooting and becomes a hero to the modern gun movement. Under the hot glare of the spotlights, though, his story begins to unravel, taking his sanity with it...

'Snapshot, 1988' tells the story of an kid in Silicon Valley who finds himself threatened by The Phoenician, a tattooed thug who possesses a Polaroid that can steal memories...

And in 'Aloft' a young man takes to the skies to experience parachuting for the first time . . . and winds up a castaway on an impossibly solid cloud, a Prospero's island of roiling vapour that seems animated by a mind of its own.
Opening Sentence: N/A

The collection opens with Snapshot which is a terrific example of exploring the classic writing trope of “what if there was…” in this case it is a camera which steals people’s memories. I liked this story a lot. The Phoenician is a sinister antagonist who Hill quickly makes the reader hate, but at the same time demonstrates how dangerous he is. It takes place over the course of a single day and has an protagonist to root for in Michael. 8

Loaded is the longest novel and in my opinion by far the best. Hill does a fantastic job of exploring a man under pressure and the lengths he would go to protect his status and secret. It is the least fantastical of the four novels but the characters more than make up for it. 9

Aloft is my least favourite although I can appreciate the idea. It tells the story of a man who parachutes out of a plane and lands on a solid cloud, which appears to manifest objects as he thinks of them. This is not a bad story, but I found it a little boring, despite having a good ending. 6

Rain is a post-apocalyptic novel based on the premise of lethal rain suddenly falling from the sky. It is the most horrific of all the four novels, with gruesome scenes. It loses something in the middle as the protagonist travels about, but the beginning and ending is very strong. 8

Overall, the novels work well as a collection, offering a nice variety both from each other and from what you’d expect to see in a traditional novel. Only Aloft  is a novel I wouldn’t recommend to others.
My rating: 8.4