Linda Green – The last thing she told me
Around 75% of the books I read are down to reviews or recommendations, 20% are because of exciting covers enticing me and the remaining 5% is down to the title and blurb. The last thing she told me is an example of the latter. The title is intriguing enough for me to check out the blurb, it was that line in the blurb though that blew me away and made me download the book.
Moments before she dies, Nicola's grandmother Betty whispers to her that there are babies at the bottom of the garden.

I mean, come on! Who doesn't want to read the book after reading that? 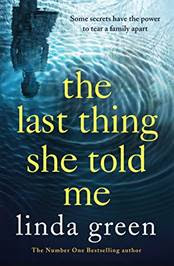 The Blurb:
Even the deepest buried secrets can find their way to the surface....

Moments before she dies, Nicola's grandmother Betty whispers to her that there are babies at the bottom of the garden.

Nicola's mother claims she was talking nonsense. However, when Nicola's daughter finds a bone while playing in Betty's garden, it's clear that something sinister has taken place.

But will unearthing painful family secrets end up tearing Nicola's family apart?
Opening Sentence: The house appeared to know that its owner was about to die, shrouded, as it was, in early-morning mist, the downstairs curtains closed in respect, the gate squeaking mournfully as I opened it.
Days to read: 25


The question you're all wondering now is: Did the book live up to the blurb? The answer is: yes, no, maybe so, but on the whole yes.
Why the confusing answer I hear you ask? Well it's a mixture of a very good story, good characters, a lot of implausibility and some slow places within the novel. For example, given the blurb we know full well there are going to be babies at the bottom of the garden otherwise what would be the point of the novel? However, it takes a little while for this point to be reached. The protagonist is told almost immediately the disturbing confession of her dying Grandmother but it takes quite a long time before she begins to believe her. This is a little frustrating although I can see why the authors done it.
The book focuses on the main protagonist Nicola, who is a reasonable enough character. She's realistic in her actions and behaviour but there is nothing that really makes her stand out. Her husband James is a bit of a non-entity to be honest. He is incredibly supportive and goes along with anything Nicola says and doesn't add any real conflict to the plot.
The best characters are supporting cast. Nicola's eldest daughter Ruby, definitely steals the scenes she is part of. She has had enough angst over her past and wondering who her real father to make her interesting. This conflict carries the novel and propels it into a much more dramatic story, elevating it above your normal mystery. The struggle between mother and daughter and daughter and step-dad is well handled and quite moving in at times.
Linda Green keeps the tension high as she expertly reveals piece by agonizing piece of the puzzle. This is done through clever devices such as a great aunt with amnesia in a mental home and then a mysterious relative who comes in but seems reluctant to reveal the truth of the past. Couple this with a mother who also clams up tighter than a safe when the past is mentioned means the reader is only treated the odd snippet of information every now and then. Whilst a little frustrating, it never gets transforms in to annoyance.
The news of the babies soon becomes widespread, and this adds another dimension in how the community reacts to the shocking news. This results in various unpleasant actions against Nicola and her family, which whilst gruesome never ringed true to me – mainly because there was no reason for the community to behave that way to Nicola who was completely innocent of the events in the past. Her only fault was pursing the truth which suggests she was being warned away from enquiring any further. Nicola however, never makes a big song and dance about her investigation to ruffle any feathers and so this part of the novel didn’t work.
What did and didn't work for me was inclusion to the mystery as a novel unfolds. There are actually three mysteries that run throughout the book: the main one is fantastic and really get me thinking about the past and the way people behaved. It is a satisfying conclusion to a great premise. The other two mysteries, whilst also good is where the aforementioned implausibility comes in to effect. The fact that the three incidents/mysteries happen to the same family I found a little bit hard to believe - and I'm a man that writes fantasy novels!
Having said all that, I thoroughly enjoyed this novel. Linda Green is an author that is very accomplished and I will definitely look out for more of her work in the future.